In our time the doctrine of the atonement/ Jesus crucified has come under attention once again. The way it is usually explained within Western Christianity, it sounds like the all too familiar abusive father who takes his rage out on someone innocent, in this case his own child, and then dresses it up by wrapping his ugly behavior up with the word love. The idea that the Creator God Himself has to kill someone in order to forgive people has understandably caused people to wonder what kind of God we are talking about.

Into the midst of this, world-renowned theologian N.T. Wright has written an absolutely incredible book. He has clearly familiarized himself with both popular and academic treatments of the atonement written recently, and pastorally identified the very real problems our current understanding of the crucifixion brings to people. This is understandable, he says, and it’s fine, because the ways that the crucifixion is understood in Western Christianity have de-railed from the actual story and meanings in the Bible. In fact, he demonstrates, the way in which the prevailing theologies of Western Christianity are explaining the atonement end up de-biblicizing it, de-Judaizing it, and paganizing it.

If we start reading the Bible at the beginning, we find the problem is not that God made the world as a testing ground to see if people would go to heaven or hell, and then makes a way for the first rather than the second. No, that is not the story we find when we read the Bible’s story. And when we make that the story, we start mis-understanding the cross in all sorts of ways that fall far short of what the followers of Jesus meant when they said that he died “for our sins” and “in accordance with the Bible.”

Wright’s book is called “The Day the Revolution Began: Reconsidering the Meaning of Jesus’ Crucifixion.” It is a life-changing, worldview-changing book; one of the best things Wright has written in a while, and that’s saying something. Run, don’t walk, get a copy, and read it.

Nearly 70 years ago Nazarene scholars were saying that the penal substitution view of the atonement was counter to Wesleyan theological commitments and implied a God who had to kill someone (exacting justice) BEFORE he was free to forgive. Since not even we humans suffer that limitation, Wesleyan theology, has a very difficult time imagining that the God who is love is required, by His own sense of justice, to take it out on someone before He can forgive someone else. In penal substitution’s view, God is not free to forgive until He has punished someone; He is not free to be merciful, until he balances the scales of justice with retribution. 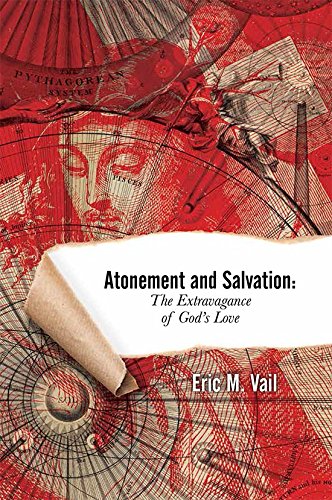 Despite this theological dissonance, no one in our tribe has gotten anything on paper to offer a better option. Until now. Eric Vail, professor of theology at Mount Vernon Nazarene University, has penned ‘Atonement and Salvation: The Extravagance of God’s Love.’  A fabulous read. Kindly worded, readable, it takes in the pertinent scholarship and discusses the atonement and salvation in large, Biblical categories, rather than more narrow, 16th century European ones. I recommend it. Beacon Hill Press: 2016.

Two generations ago, the landmark theologian in our tradition (Nazarene), H. Orton Wiley, wrote that the penal substitution theory of the atonement was inconsistent with Wesleyan (Nazarene) theological commitments, and therefore could not be our atonement theory. Franciscan priest and thinker Richard Rohr is also concerned that penal substitution has led western Christianity down very negative pathways. He writes,

“For the sake of simplicity and brevity here, let me say that the common Christian reading of the Bible is that Jesus “died for our sins”— either to pay a debt to the devil (common in the first millennium) or to pay a debt to God the Father (proposed by Anselm of Canterbury [1033– 1109] and has often been called “the most unfortunately successful piece of theology ever written”). Scotus agreed with neither of these readings. He was not guided by the Temple language of debt, atonement, blood sacrifice, or necessary satisfaction, but by the cosmic hymns of Colossians and Ephesians. If Scotus’s understanding of the “how” and meaning of redemption (his “atonement theory”) had been taught, we would have had a much more positive understanding of Jesus, and even more of God the Father. Christian people have paid a huge price for what theologians after Anselm called “substitutionary atonement theory”: the idea that, before God could love his creation, God needed and demanded Jesus to be a blood sacrifice to atone for a sin-drenched humanity. Please think about the impossible, shackled, and even petty God that such a theory implies and presents.  Christ is not the first idea in the mind of God, as Scotus taught, but a mere problem solver after the sad fact of our radical unworthiness….

We have had enough trouble helping people to love, trust, and like God to begin with, without creating even further obstacles. Except for striking fear in the hearts of those we sought to convert, substitutionary atonement theories did not help our evangelization of the world. It made Christianity seem mercantile and mythological to many sincere people. The Eternal God was presented as driving a very hard bargain, as though he were just like many people we don’t like. As if God could need payment, and even a very violent transaction, to be able to love and forgive his own children— a message that those with an angry, distant, absent, or abusive father were already far too programmed to believe….

Scotus, however, insisted on the absolute and perfect freedom of God to love and forgive as God chooses, which is the core meaning of grace. Such a God could not be bound by some supposedly offended justice. For Scotus, the incarnation of God and the redemption of the world could not be a mere reaction to human sinfulness, but in fact the exact, free, and proactive work of God from the very beginning. We were “chosen in Christ before the world was made,” as Paul says in Ephesians (1: 4). Sin or problems could not be the motive for divine incarnation, but only perfect love! The Christ Mystery was the very blueprint of reality from the very start (John 1: 1)….

It is no wonder that Christianity did not produce more mystics and saints over the centuries. Unconsciously, and often consciously, many people did not trust or even like this Father God, much less want to be in union with him. He had to be paid in blood to love us and to care for his own creation, which seems rather petty and punitive, and we ended up with both an incoherent message and universe. Paul told us that “love takes no offense” (1 Corinthians 13: 5), but apparently God was the big exception to this rule. Jesus tells us to love unconditionally, but God apparently does not. This just will not work for the soul or mature spirituality. Basically when you lose the understanding of God’s perfect and absolute freedom and eagerness to love, which Scotus insisted on, humanity is relegated to the world of counting! Everything has to be measured, accounted for, doled out, earned, and paid back. That is the effect on the psyche of any notion of heroic sacrifice or necessary atonement. 9 It is also why Jesus said Temple religion had to go, including all of its attempts at the “buying and selling” of divine favor (John 2: 13– 22). In that scenario, God has to be placated and defused; and reparation has to be paid to a moody, angry, and very distant deity. This is no longer the message Jesus came to bring.

This wrongheaded worldview has tragically influenced much of our entire spirituality for the last millennium, and is still implied in most of the Catholic Eucharistic prayers. It gave lay Catholics and most clergy an impossible and utterly false notion of grace, mercy, love, and forgiveness— which are, in fact, at the heart of our message. The best short summary I can give of how Scotus tried to change the equation is this: Jesus did not come to change the mind of God about humanity (it did not need changing)! Jesus came to change the mind of humanity about God. Christ was Plan A for Scotus, the hologram of the whole, the Alpha— and therefore also the Omega— Point of cosmic history.”